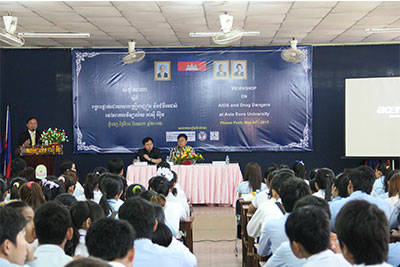 On May 4 , 2012 , the National Authority for Combating Drugs and the National AIDS Authority, in cooperation with AEU, organized a workshop on drugs and AIDS dangers in order to disseminate the issues among staff, lecturers/professors, and especially young students. The workshop was attended by staff, lecturers/ professors and approximately 470 students of Foundation Year.

In the opening remark, Mr. Choeun Savorn, Vice Rector of AEU and representative of H.E. Duong Leang, Rector of AEU, said the workshop would provide young students with sound knowledge about drugs and AIDS dangers—dangerous issues in the country.

H.E. Lieutenant General Neak Yuthea, Director of the Department of Legislation Education and Rehabilitation of the National Authorith for combating Drugs presented various drugs-related issues to the participants and especially young people mainly focusing on what drug was, drug effects, drugs abuse, drug dangers, and its preventions. He also added that drug abuse would result nothing, except negative effects to our future, property and social interests. Thus, all youths must say “no” to drug abuse.

In addition H.E. Dr. Sim Kimsan, Director of the Depart - ment of Communication and Resource Mobilization also presented the students with possible dangers caused by AIDS, a violent epidemic and serious concern of the Royal Government. Also, he emphasized that apart from drugs, AIDS is also the most dangerous problem which prevents the country from social development. Further, if our country has high rate of AIDS prevalence, it is hard for the country development. Therefore, in order to avoid this issue, all the students should understand as much as possible all the AIDS-related issues. 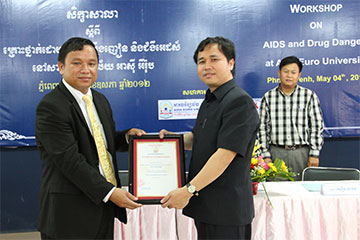 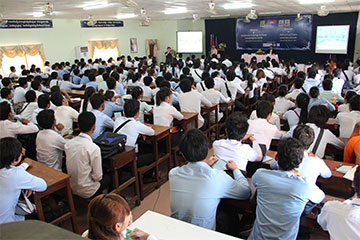 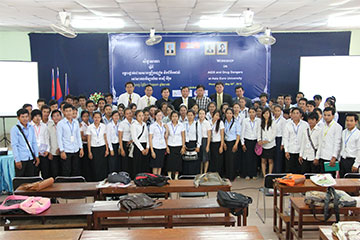